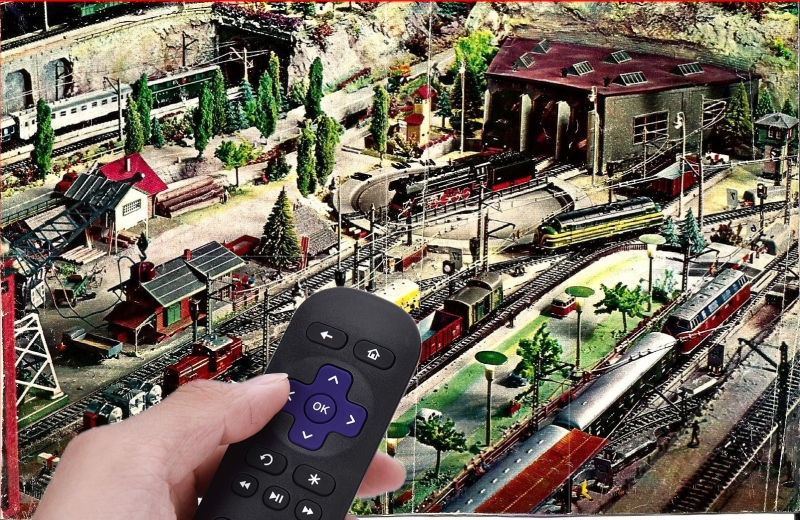 How to simplify the management of a large model railroad

The model makers who deal with models of electric trains are numerous and this hobby has long been very popular. Lately the number of people passionate about electric trains has surged. It is even possible to find railway models at the State Railways, where employees passionate in the railway after work, continue to deal with trains (in miniature), this, various locations in Italy. Among all these, we find the famous but not unique model of via Sacchi in Turin, near the Porta Nuova TRAIN station.


Complexity and difficulty grow together

All enthusiasts tend to build very large and complex models, some to say the least wonderful, but all must face the difficulty in managing them, which grows together with the size of the model. Normally all the controls for the speeds/directions of the trains, and for the positions of the exchanges, are concentrated on a single console, but this limits the operation of the operator, to such an extent that he is often forced to abandon the station, and move to see the most hidden and distant areas of the model, but this can give rise to problems, especially when a collision between two trains is about to occur, or a train must be slowed down, for the passage in particularly complicated routes, which require a low speed.

To put an end to the above problems, the REMOTINO NANO TRAIN project was born, and immediately afterwards the older brother REMOTONE MEGA TRAIN. As you can guess from the name, these projects are based on the very famous Arduino boards, in particular the first uses an Arduino NANO, and the second, an Arduino MEGA, or rather, Controllino MEGA, an industrial PLC with all the 12 and 24 volt interfaces , and the necessary Realis, ready for use inside, and which is 100% compatible software with Arduino MEGA. This solution greatly simplifies the construction of the largest system, in terms of wiring and relay interfaces.


A console on the PC video

To complete the work there is a software for Microsoft Windows PC, which generates a console capable of showing on the video, the status of all the exchanges and the speeds set for the trains, which as we understand, takes place by our infrared remote control. The connection between Remotino and the PC console is made with a simple USB cable.

The heart of the whole project is the infrared remote control, practically very similar to the one we use every day to control our TV, and also on this occasion, it helps us a lot, in all the operations we have to do continuously, for the correct management of the model and of the electric trains, in short, when we transform ourselves into authentic station leaders who orchestrate all the model. As we are no longer relegated to being close to the manual console, we will be able to move freely, while continuing to have all the controls at hand, including the emergency button, corresponding to the power on button, which stops all trains in one shot and avoids possible collisions with the precious models, which are a real economic damage, also considering the value that certain trains have. The remote control is a special model, with a special coding, built by the Wallis remote controls; this special encoding prevents us from interfering and being interfered with by remote controls for TV or other commercial objects. However, if desired, any remote control model can be read, simply by reprogramming the receiver table, residing in Arduino, and universally known as IRREMOTE.


The commands available on the remote control

The controls available on the remote control have been divided into three large groups: speed/direction controls, EXCHANGES controls and auxiliary controls.
Pressing the "A" button activates the speed/direction controls. Then we select the track trunk number (from 1 to 6 in Remotone Mega), and finally with the up/down arrows we can accelerate, decelerate, stop and reverse the direction of travel of the train. The voltage to the motors is varied in PWM, at 1024 steps, and this allows very sweet and very realistic starts and stops. There is also the TURBO button, which when pressed, gives all the power available for the only time corresponding to that of pressing the button; it is used to overcome tiring climbs for the convoy.
By pressing the "B" key we activate the exchanges command, after this we must select which of the 8 exchanges we want to control by pressing the relative number, and then with the right / left arrows we decide the direction in which we want to place the exchange. The CONTROLLINO MEGA module has 16 relays, which are used to control 8 exchanges in their two possible positions.
Pressing the "C" key activates the 6 auxiliary controls, which can be used for all the things that need to be operated with a switch, such as street, station lighting, level crossings with barriers. Here too we select the number and then the up and down arrows to switch it on or off. Here too we find six MEGA CONTROLLER outputs already at 12v, ready to use.

Many years ago, some of the best-known houses that made trains, such as Lima or Rivarossi, began their production with direct current motors. Kits to make these analog systems digital were born below, but doing this upgrade is quite expensive, both economically and as a job, having to install a circuit to digitize each locomotive. Instead the Remotino or Remotone systems allow to increase the performances and usability of a complex model, with minimal intervention, both in terms of time and in economic terms. Moreover, it is possible to connect everything in parallel to the existing console, without compatibility problems, and continue to operate in both modes.

The whole Remotino project, together with diagrams, software sources, material list, and the related REMOTINO CONSOLE PC software, are available open source on the Arduino Project Hub, for anyone who wants to try their hand at building it. If, on the other hand, someone wants it ready for use, they must contact the creator of the project, using the contact page of the www.infrarossi.it website, where the special coded remote control described above is also available.